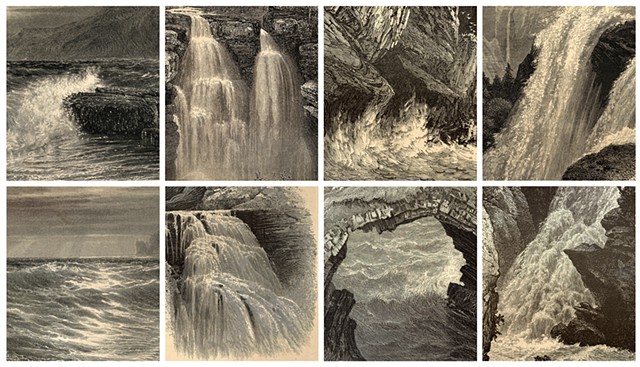 The digital prints included in this Portfolio were selected from two discarded volumes titled Picturesque Europe, published in New York by D. Appleton & Co around 1875. The metal engravings found in the volumes were in terrible condition and mostly unsalvagable. I was able to curate and save a number of them. Each selected metal engraving was previewed, cropped, scanned and printed on an Epson printer using archival inks.

The re-contextualized subject of the digital prints is mostly of rivers, lakes and oceans. I view them with a mixture of mysticism, fascination, and dread. We impress our greatest, most primal fears upon rivers, lakes and oceans, as well as our curiosity and our hopes for salvation. They continue to be an enigma, a symbolic representation of the forces of good and evil; of things that are beautiful and those that are beastly; of that which is human and that which is spirit...

This portfolio was created in memory of all the victims who have died from the devastating 2004 Sumatra-Andaman earthquake. The earthquake caused a series of devastating tsunami along the coasts of most landmasses bordering the Indian Ocean, killing nearly 230,000 people in eleven countries, and inundating coastal communities with waves up to 100 feet high. It was one of the deadliest natural disasters in recorded history. Indonesia, Sri Lanka, India, and Thailand were the hardest hit.

The 2004 Sumatra-Andaman earthquake is the second largest earthquake ever recorded. This earthquake had the longest duration of faulting ever observed. It caused the entire planet to vibrate and triggered other earthquakes as far away as Alaska.